細說從頭 Story from the beginning

Finally, we wanted to establish a “home on internet” for our vegetable garden. Operated for four and a half year, started from a barren land to what it is now, our small little achievement on this farm is now deserved to be introduced – Terra Organic Farm (He Ping Organic Farm or和平農場 in Chinese). The origin of this name is to commemorate my dear little brother, He Ping. He died one month after we bought this land. While the name “Terra” was given by one of our dearest friend, Ruyu.
April of 2006, when our first daughter was only 1 year and 3 months old, her father was desiring and hoping so much on having a land which is suitable for us to plant organic vegetables. He knows that has always been my wish to grow organic vegetables. He said, “I can do everything, but you just want to have a farm.” I was a kid who grown up in a farm, the early 20 years in my life time had no television. The land, farm, and river are my growing up memory. My father loves to read books and also tell us story, concern with social environment. My life partner, Tien Khuan, before marriage, he was a lecturer in a college. He needs to choose either pursuing his doctoral degree or farming on mountain. However he did not think too much and decided to manage a farm. A dreamer like me, have a person who makes my dream comes true. 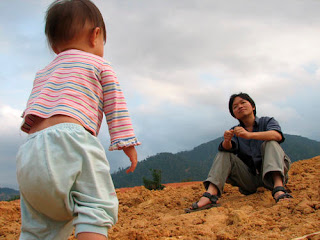 一歲的大女兒，一片荒蕪的土地
One year old daughter, and a barren land

The price of the agricultural land at Cameron Highlands is extremely high, the more remote the land, the cheaper price it is. We found a land at Lojing Highlands which is near to Cameron Highlands. The day I followed him to visit the land, I gave up before we reach the destination, the journey was still far away, and the road condition was too terrible!! Entering from the main road into the vegetable farms, we need to travel on the potholed dirt mud road for half an hour, crossing over 3 big and small rivers which were without bridge, our car need to drive into the riverbed in order to cross over the river. However when I reached this piece of land, after I feels this land heartedly, I was attracted by its “aura”! Both left and right side of this land was surrounded by two rivers, the end of the land is the confluence of these rivers, opposite the river is a forest, I still remember the atmosphere I felt on that time. This comfortable and pleasant feeling reminded me running and busy around vegetable farm, singing to the sky….the earthy smell of soil and the fresh clean air were such familiar….even thought I learned that organic farming is not an easy job to operate and manage (I understand this, but Tien Khuan who was a amateur totally did not), however, in order to provide my children a childhood like what I had, in order to provide chances for myself and others to have “good” food, we decided to manage this piece of land!
The first thing we started to do was constructing the roads, because once raining, the car will be easily stuck in the muddy road and trapped in the mud. Few workers were hired on that time, we dig sands near the river and carried them by using our only car with a small car bucket, transferred these sands into our farm, we bought cement and one big truck of stones, then we mixed the cement and did paving.
Meanwhile, facing a piece of land without organic matter, the feeling was really kind of “all at sea”, what and how to start actually!?
Before this land was bought, it was flatten by excavator, the topsoil was being pushed away totally, leaving a mud land without organic matter. Neither one grass nor one earthworm was in the land.
First we planted legumes as a method to increase nitrogen and organic matter in the soil, I still remember that evening when I was sprinkling mung bean seeds, dark cloud was gathered on the sky and rain started to falls, but I insisted to leave only after the last seeds sprinkled. But then that was just ten minutes, it was already a heavy downpour, once again, our car trapped in the mud dirt! With the help of tools and workers to “push” our car, just traveled for a little distance, we were totally stunned by the scene! This scene was so impressed and deep in mind until now, that was a little downhill slope, and after the slope was a river, and beside that river was a stream of deep ditch, however the road surface was covered up by fast flowing water, the road on now at the present was a river!! We could not see where the ditch was. The sky was getting darker, the rain was still pouring heavily, we were figuring how to get out from there, or else we have no food. Hence we get down from the car and “find the road”, carried away the stones brought by the flowing river, at long last we passed across the two small rivers, and the last one was the big river. This time, we could only waited beside the river, after about half an hour waiting, the water level decreased and finally we could cross the big river. With that experience, now every time we see the sky gets dark, or hear raining from distance, we will hop into car and leave right away!
Yet, with none organic matter on the land, even the mung bean could not grow. The method of cultivating legume to add in nitrogen to the soil is by plowing it into the soil once the plants flower. But on this land, the mung beans were thin and yellowish when they grew to 3 inches high, we could not wait for the day they flower!
We need to add in enough organic matter into this land. We bought rice husk and rice bran which decayed after setting aside for more than one year from a rice milling factory, we bought discarded cocoa husk from cocoa factory, and any organic material that we could get into our hand easily. We bough rice straw to mulch on the land to prevent soil nutrients lost. But this is not practical, because the rice straw was carried far away from Kedah, one roll of rice straw is 400kg and the price is surprisingly high, carrying this stuff up along our bumpy road is not a good idea. The process of mulching was burdensome, and there was too much rain water, causing the rice straw to become compost very fast. 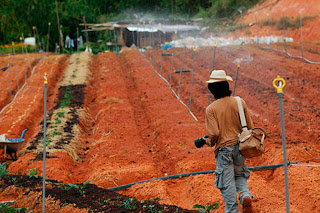